On March 10, 1970 a charter was granted by the Grand Lodge of the International Association of Machinists and Aerospace Workers to form Local Lodge 2413.

The original 55 members developed the fledgling Local Lodge into a force which now represents aviation workers, transportation workers and workers in the manufacturing sector, building a cohesive force which has gained a reputation as a fighting force for decent working conditions and equitable pay for its members.

In 2016 we embarked on our (46th) year with a renewed pledge to work toward improving working conditions, pay and job security of our members. 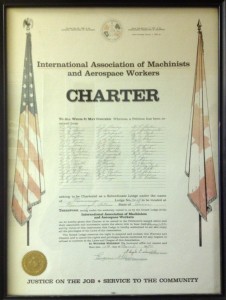 The IAM Scholarship Competition is accepting applications for the 2023 year. The competition is open to members of the IAM and their children throughout the United States and Canada. Again, this year’s Scholarship Program will be fully accessible iamaw.ca/iam-scholarshi… pic.twitter.com/i2lghMNaEK

We are wishing everyone a safe and happy holiday season ✨ Read a holiday message of gratitude and hope from IAM International President Robert Martinez:

Vancouver, BC – IAM District 140 filed two grievances after mass layoffs at Swissport Vancouver and has won them in a show of perseverance over two years. The first grievance was filed at the end of 2020 when the Company paid out the members for their iamaw.ca/district-lodge… pic.twitter.com/UBCp1GOJSs